This is our third virtual internship with Global Experiences.  Peter and I agreed to this virtual internship for an eight-week period with a young American University student.  I met Katelyn O’Connor virtually and we agreed to a series of blogs about topics that are relevant and are of interest to her personally. Following is the third in the series of blogs by Katelyn.

Kate “Oak” O’Connor is a rising fourth-year student at The University of Scranton in Scranton, Pennsylvania. A double English and Philosophy major, O’Connor is also enrolled in the Special Jesuit Liberal Arts Honors Program (SJLA), an alternate general education track with a focus on the tradition of Jesuit liberal arts. O’Connor has been published twice in Esprit, The University’s review of arts and le, and was awarded the Berrier Prize for Poetry for “Penrose Wake.” O’Connor has also presented a paper on Charles Dickens’ travel essay “Night Walks” at Carroll University’s virtual conference Victorian Pasts, Presents, and Futures. After graduating, O’Connor hopes to work in editing or in a publishing house– anywhere that the written word can be discussed, distributed, and celebrated.

A few months ago, I was talking with a fellow student in the SJLA program. She told me that in job interviews, she often had to “sell” her philosophy second major. (SJLA does not require students to major in philosophy, but it’s quite easy to accomplish, so many students go for it.) In other words, she had to convince potential employers that her philosophy major was useful in the workplace. 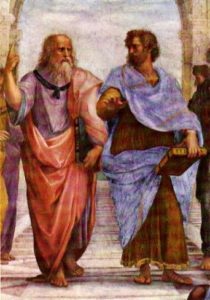 This is a story I know well, and a position I’ve been in many times outside of job interviews. I think that nobody should have to do that kind of convincing, whether for a job or otherwise. Philosophy means “love of wisdom”, and what workplace wouldn’t want to have somebody who loves learning? Such a person can provide valuable insights to their colleagues even without namedropping Aristotle or Descartes. Philosophy majors love learning and thinking, and this kind of skill is valuable no matter the field.

I haven’t yet had the opportunity to be in a job interview where I am asked about my second major, but if it does arise, I plan on being as honest as possible about why I chose it as my second major. I love thinking and discussing all kinds of things—and although existentialism, solipsism, and metaphysics aren’t on my daily list of thought processes, I find it valuable to have a space where I can explore those ideas and others like them.

This is where SJLA comes in. SJLA stands for Special Jesuit Liberal Arts, and although it’s technically classified as an honors program, it functions more as an alternative general education track. It’s definitely not for everyone—my class started with 60 SJLA members and has shrunk to 25—but for those who do enjoy it, it’s an incredibly valuable addition to the college experience… even with the infamously nerve-wracking finals and projects! Our experiences include a public recitation of Phaedrus while wearing bedsheet togas, defending St. Thomas Aquinas in front of a ruthless board of adjudicators, and debating each other over topics of our choosing. (These are all blog-worthy in themselves! I will say that the last one occurred this past May, and my team only lost by a single point. I like to think it was because I dressed up like Hawkeye Pierce from M*A*S*H—blue hibiscus Hawaiian shirt, white cowboy hat, green pants and combat boots.)

As you can imagine, SJLA classes have a much more inviting and familiar atmosphere than most other classes. My university doesn’t have class sizes larger than about 35, but even in the smallest classes, students rarely talk to each other before class begins. Meanwhile, walking past a classroom full of SJLA students will allow you to hear lively conversation and all kinds of jokes. We’re a tightly knit group, and our interest in philosophy is what brought us all together—but our closeness somehow makes the philosophy even more interesting.

Philosophy is far from useless, and like so many things, it has the capacity to bring people together. If you don’t think you’re interested in philosophy, find somebody who is and talk to them. It might open up new worlds you never dreamt of.